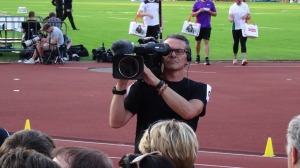 As I’ve said many times, even though I don’t watch it, I have no philosophical bitch with Reality TV.  It’s TV, so, as the man said “Here we are now: entertain us.”  And presumably, it does.  But have you ever wondered about the cameraman? (Yes, I realize sometimes they’re women, but we all know what we’re talking about.)  He’s the guy who has to do everything the Reality Star does — with one hand holding a camera.  This is nothing special if you’re Keeping up With the Kardashians but in the wild and woolly world of Reality TV, I imagine some gigs are tougher than others.

Ice Road Truckers – The camera follows a group of truck drivers in northern Canada and Alaska — in winter.  I’ve been to northern Canada, and the place is so full of nothing even Google doesn’t go there.  Calling it “tedious” is wildly optimistic.  The cameraman’s job is to film somebody driving a truck, hour after hour, through this white wasteland — on the off chance that something will go wrong.  That anything will go wrong.  Please, God!  Break something!  At kilometre 300, he can’t feel his bum anymore.  At kilometre 600, he’s convinced he’s trapped in The Matrix, and by kilometre 1000, he’s praying for a polar bear to come and eat him.  Nowhere in the history of entertainment has one person so completely wished for disaster to befall another human being than on the set of Ice Road Truckers.

Swamp People — The camera follows a group of ‘hunters” who find and kill alligators.  What possible enticement would convince anybody to go and film that?
Wanted:  Experienced camera person to travel to a disease-invested swamp, get into an itty-bitty boat with a couple of hillbillies, and film them attacking gigantic piss-off alligators.  Good balance an asset.  Lack of imagination a plus.  Malaria, typhus, cholera, hepatitis A, B and C, yellow fever and rabies shots required.  Preference given to orphans and idiots and anybody who hasn’t seen the movie Deliverance.

And the granddaddy of them all:

Deadliest Catch — The camera follows crab fishermen in the Bering Sea — in January.  Commercial fishing is one of the most dangerous occupations on the planet.  People die doing this stuff — frequently — when they’re holding on with both hands.  Imagine standing in the middle of an iceberg-cold ocean, pointing a camera at a 10 metre wave that’s about to drown you, the stupid little boat you’re standing on, and anyone else not smart enough to be on dry land.  What would you be thinking?  “Wow, those four years of film school are really going to pay off now!”

So, even though I don’t watch it, I tip my hat to Reality TV — if only for the person working the camera.  I’d pay money to eyeball that guy.