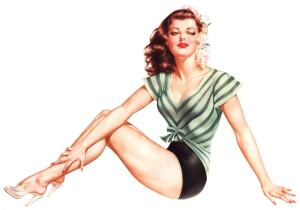 Now that Playboy magazine has renounced nudity, it’s become an easy target — a misogynist relic of the 20th century — more silicon than substance.  Perhaps.  I don’t know.   Like most people, I don’t actually read Playboy anymore, so I’m in no position to judge.  However, I do know this.  If you’re over 35 and not dead, you’re part of the massive impact Playboy has on our society.

The Playboy Interviews read like a history book of our times:

In one single year, 1964, Playboy interviewed Vladimir Nabokov, Ayn Rand, Jean Genet, Ingmar Bergman and Salvador Dali.  And Playboy didn’t just follow what was trending; it tried to understand.  It interviewed Martin Luther King Jr. at the height of the Civil Rights Movement in 1965; Timothy Leary, when mainstream drug use was a brand new phenom in ’66 and Steve Jobs, immediately after getting booted out of Apple in 1985.  Plus, Playboy took some chances, like sending Alex Haley, the author of Roots, to interview George Lincoln Rockwell, the leader of the American Nazi Party.

Yes, Alex Haley wrote for Playboy and so did Norman Mailer, Gay Talese, Hunter S. Thompson and Gore Vidal.  There were others too, but the list of fiction writers is even more overwhelming:

In fact, if it wasn’t for the boobs, Playboy would be considered a literary magazine — one of the best.

But what about those boobs?

Some of the most beautiful women in the world have voluntarily taken their clothes off for Playboy:

Farrah Fawcett, Olivia Munn, Robin Givens, Katarina Witt, Ursula Andress, Tia Carrere, Kim Basinger, Elle Macpherson, Kate Moss, Catherine Deneuve, Shari Belafonte and Raquel Welch among many, many others.  The numbers alone take Playboy pictorials beyond sleazy.  Besides, is there any great distance between Charlize Theron and Titian’s “Venus of Urbino” or Naomi Campbell and Goya’s “The Nude Maja?”  Argue all you want about objectifying women, but if you want a lesson in that go to the pages of Vogue or Fashion or Harper’s Bazaar.  Rhetorically speaking, is a pouting, uber-skinny supermodel a more acceptable female image?  Or is it just that she’s covered up their naughty bits?