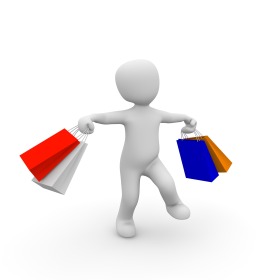 Today is Black Friday, the ultimate orgasm of North American conspicuous consumption.  By close of business today, millions of people will have spent billions of dollars on tons of crap they couldn’t possibly need.  Not only that, but consumer debt will take a measurable leap skyward, as most people will be spending credit card money they don’t even have.  And why do we do this?  Because we have to.

It’s very fashionable these days to decry our consumer society, but I’ve noticed that the same people who are always yipping about how “Money can’t buy happiness” usually have an abundance of both.  Obviously, money can’t buy happiness — but let’s get real — it certainly takes the sting out of any bad mood I’ve ever had.  Likewise, it’s pretty hard to be genuinely joyous when your only leisure activity is lying awake at night, worrying about how to pay the rent.  I’ve been rich and I’ve been poor; take a wild guess which one I prefer.

Let’s put this thing into perspective.  Black Friday isn’t about money or shopping.  It’s way more primeval than that.  Black Friday is the hunt.  Trust me, if you scratch the 21st century off those folks camped out in front of WalMart, you’ll find a pack of spear-waving Cro-Magnon, on the prowl for mastodon.  They may have traded in their pointy sticks for an American Express card, but so what?  Grog the Caveman, wearing a sabre tooth tiger pelt, and Morgan the Media Consultant, playing with the latest iPhone, are basically the same person — separated by a few millennia of history.  It’s all about prowess.  Both of them are telling the world, “Hey!  I am a successful Homo Sapien.”

Across the length of human history, the rules haven’t changed that much.  We might all mouth the civilized platitudes (“Money isn’t everything,” etc.) but at the end of the day, successful people usually find a way to tell the world about it.  Whether it’s a solid wall of sound stereo system or an ancient, esoteric salad ingredient, the rest of us know who’s making their way in the world.  And that’s why Black Friday exists.  Bargain hunting is hunting, and loading a 60-inch TV into the back of your SUV is no different from dragging a woolly mammoth back to the cave.  So conspicuous consumption be damned!  Shop ’til you drop, North America!  It’s in your DNA.

3 thoughts on “Black Friday: Who, What and Why?”