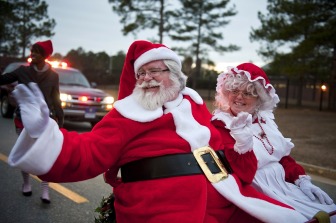 Every December, the world is gripped in a pandemic of Clausaphobia – the irrational fear of Santa Claus.  Believe it or not, there are people in this world (normal, rational, reasonable adults) who don’t believe in Santa Claus.  This is sad.  Fortunately, we all know Santa Claus does exist, but for those skeptics out there I will, once again, set the record straight with hard evidence.

Here’s the real story of Santa Claus, based on historical fact.  Santa Claus has been around forever.  He’s known by a number of different names — Sinterklaas in Holland, Father Christmas in Britain, Pere Noel in France etc. etc. — but it’s all the same guy.  He lives at the North Pole with Mrs. Claus (who, oddly enough, doesn’t have a first name) a ton of elves and the reindeer.  All year long, the elves make toys in a gigantic workshop.  Then, once a year, Santa loads up his magic sleigh, hitches up the reindeer (who can fly, BTW) and goes around the world, delivering toys to good girls and boys.  How do I know this?  Documented proof!  Santa Claus has actually been seen – at least three times in the last two centuries.  There are also a few secret contemporary photographs which haven’t been authenticated.  However, let’s just stick to the facts.

In 1823, Clement Moore, a professor at Columbia College, woke up on Christmas Eve and witnessed Santa Claus delivering toys to his house.  He wrote a poem about his experience, called ‘Twas the Night before Christmas which was published in the Sentinel newspaper in Troy, New York.  In that poem, Moore describes Santa quite accurately.  He also describes the reindeer (miraculously remembering Santa’s names for them) and their ability to fly.  There is some controversy over Moore’s account, however, because he describes “a miniature sleigh, and eight tiny reindeer” and goes on to call Santa himself “a right jolly old elf.”  Since we know (from corroborating evidence) that Santa Claus is actually quite a large gentleman, we can only conclude that Clement either didn’t have his glasses on or suffered from an undiagnosed eye ailment.

Santa Claus was next seen by Thomas Nast, sometime in the 1860s.  Nast was a cartoonist and social commentator who gave us, among other things, Uncle Sam, the symbols of both the Republican and Democratic political parties and the term “nasty.”  Obviously, a witness to history like Nast would not let his encounter with Santa Claus go unrecorded.  In the January 3rd, 1863 issue of Harper’s Weekly, Nast drew an illustration of Santa Claus meeting Union troops and passing out gifts during the Civil War.  We know this portrayal to be accurate because Santa Claus appears exactly as Clement Moore described him!  Clearly, these two depictions are of the same person.  Nast seems to have developed a long-term relationship with Santa Claus, because, twenty years later, he drew him again in what looks like a seated portrait.

The next documented sighting of Santa Claus occurred sometime in the late 1920s.  Haddan Sundblom, an advertising artist, must have met Santa on several occasions or even convinced him to, once again, pose for a portrait.  In 1931, Sundblom painted a picture of Santa as an advertisement for the Coca Cola™ Company.  It appeared in the Saturday Evening Post.  Sundblom’s image was immediately and universally recognized as Santa Claus — the same Santa Claus Nast drew 70 years earlier.  In fact, Sundblom’s portrait was so accurate that over the last 80 plus years, not one single person in the entire world has even hinted that this might not be Santa Claus — not one.

These are just three examples that document the truth about Santa Claus.  There are more.

This Christmas, as you celebrate the season of joy, remember that there are those among us who are frightened and confused.  And although education is our best defence against Clausaphobia, don’t confront those who suffer (clausaphobes get very agitated by the truth.)  Accept them.  They are poor unfortunates, and it’s not their fault.  Perhaps, you can make a difference if you just say, in a kindly voice, “You don’t have to believe.  Just write to Santa.  He’ll answer.”
Santa Claus
North Pole
Canada
H0H 0H0