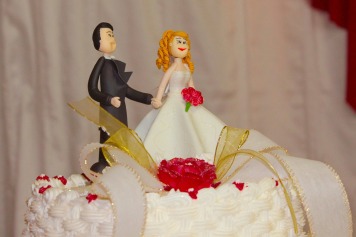 Call me a hopeless romantic, but there’s something seriously icky about Rupert Murdoch and Jerry Hall getting married last week.  I’m not one to deny anybody happiness, and if it makes you happy to throw a big party and invite Bob Geldof — knock yourself out.  (Murdoch? Geldof? There’s some irony there!)  My problem is they called it a wedding.  WTF?

People get married for all kinds of reasons, but for the life of me, I can’t figure out even one for these two.  Murdoch is the king of the sleazier suburbs of the media world, and Hall was an A-list celeb whose best-before-date expired when Mick tossed her ass.  Murdoch recently weaselled his way out of jail time (it helps to have a roomful of lawyers and 12 billion dollars) and Hall appeared on Strictly Come Dancing, the supermodel equivalent of doing Depends™ commercials.  What could these two possibly have in common?  Well, I guess that depends.

Geriatric sex aside (which is so kinky even I don’t want to contemplate it) both of these folks have enough money to find far more supple bed partners — and in the past, they haven’t exactly been shy about doing just that.  Besides, Murdoch is rich enough to buy Viagra™ — all of it, including the patent — and rebrand it Halls Sugar-Free Warm-ups™ if he so desires.  So it ain’t lust, folks.

Nor is it money.  Rupert might be rich, but Jerry’s no slouch herself. When you’re worth north of 15 million, it’s not like you’re looking around for lunch money.  Besides, I would think Rupert and his kids had a couple of pre-nups up their sleeve before anybody walked down the aisle — and if they didn’t, that roomful of lawyers I mentioned earlier probably did.  So, the most recent Mrs Murdoch might be a gold-digger, but she’s not using a very big shovel.

Personally, I think Rupert and Jerry just wanted to throw an in-your-face party to show the world exactly how don’t-give-a-shit rich they are.  However, in our Post-Kardashian universe, one more glitzy party isn’t really news now, is it?  So, Rupert, (remember, this guy owned News Of The World) found a headline to hang it on: “I Thee Wed.”  Honestly, if they really are in love and want to live happily ever after, why don’t they just buy Wales and go live there?

5 thoughts on “The Rich Are Different”