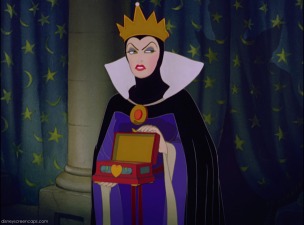 We live in a time when anybody with the slightest complaint about our society (or life in general) plays the discrimination card.  The fact is there are so many groups claiming they’re oppressed these days that there’s hardly anyone left to do the oppressing.  The problem is, of course, in an ocean of phantom injury, the true tears of injustice frequently go unnoticed.  Which brings us to the one group who have endured and battled prejudice for centuries — stepmothers.

Over the years, the media has portrayed stepmothers as evil, wicked and, at times, even demonic.  Since the days of the Brothers Grimm and Hans Christian Andersen, stepmothers have been seen as second class citizens.  The struggles they face trying to hold blended families together are demeaned and the emotional price they pay ignored.  No one weeps when Snow White’s stepmother, The Queen, discovers she is no longer “the fairest of them all” — an emotional time for any woman.

And even though our society has made massive strides in tolerance and equality in other areas, the stepmother remains a cruel cliché.  Disney Studios alone makes millions exploiting the stereotype that stepmothers are wicked creatures, capable of anything.  What child doesn’t still cringe at the sight of The Wicked Queen in Snow White?  And Cinderella’s Madame Tremaine remains an icon of evil.  It wasn’t until 1969 that a brave Sherwood Schwartz brought The Brady Bunch to American television.  Finally, a fictional stepmother, Carol Brady, who was not emotionally stilted, steeped in cruelty, hurt and harm!  In fact, the entire program practically dripped with kindness.   Alas, it was not enough.

Since Carol and the rest of the Bradys were cancelled in 1974, the media’s assault on the stepmother has been relentless.  It is a litany of shame: Frieda in Happily N’ever After, Rodmilla de Ghent in Ever After, Clementianna in Mirror Mirror, Queen Narissa in Enchanted, Queen Ravenna in Snow White and the Huntsman and, of course, Evil Queen Regina in Once Upon A Time.   And now that Disney is cranking out live action remakes, there’s no end in sight.

It’s time to end the nightmare.