This is a gateway drug to the fiction of WD Fyfe — an excerpt from “The Last Romance of Jasper Conrad.” 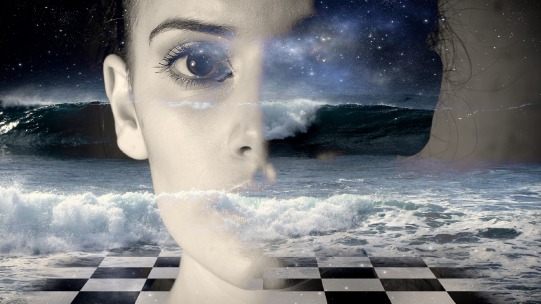 The last sun tip was over, pulling all the long shadows away with it into the water.  They had walked up the hills above the sea, their own shadows gliding and sliding ahead of them.  Now they stood near the top, looking out, and there, at their feet strings of stars appeared in the frail blue water with trails of moving silver chasing them like ribbons.  First one, then more and more.

And as she watched the boats, the real stars dotted into the sky above her, point bright, one and one.  Each light dipping its finger in the shivering water.  And slowly in the accumulating darkness, there was no horizon, no sea, no earth — and she was standing in the sky, surrounded by the heavens.

And there was music, carried faint along the warm evening breeze.

“It’s from the radios on the boats.  They’re bringing you tomorrow’s dinner.  Let me show you something.”

“There,” he said and turned her shoulders.

Down by the bay, lit by floodlights, the Roman ruins stood like great candles in the collecting night.  And as the solid white lights traveled up the hill, she could clearly see the ancient city, where it had stood.  It was real, like endless time, alive in front of her.  And she could just see him, dark outline and close to her — close enough, if she fell, tumbled into time and the sky — he could catch her.

“That’s where your friends are going to be,” he said, motioning to a glowing row of gauze colored tents, stuck in the tumbled columns.  And as if on cue, a set of huge headlights flashed out and cut lines high into the darkness.  The faint music from the boats swallowed whole by the diesel motors of the approaching bus.

“Oh,” she said and turned away.

As the noises died, he found a place in the clear night overlooking the bay.  Two broken shoulders of stone, smooth with time and picnics and half lit by the far-off nearest floodlights.  He spread the blanket and knelt over the basket.

“Bread, cheese, wine, olives and what i-i-s-s-s probably fish.  Not quite a drunken Bulgarian Luau, but we’ll get by.”

“What is this?” she asked, actually speaking directly for the first time since the night had come over them.

“Hmm, Ferguson’s idea of a picnic, I think.”

He couldn’t see her face clearly, but her voice was urgent and her hands, white, were moving between them in the light.  She leaned forward.

“There isn’t like something going on, is there?  You wouldn’t do that to me?” she was shaking her head.

He understood, thought and decided.

“No,” he said completely.  She slipped back into the half-light.

The night was warm, like a shawl across her shoulders.  She could feel it tucked into her.  The music flickered, there and gone and again, melody low, recognizable pop tunes in unrecognizable languages, aroma sounds carried on the air.  She could taste the night on the glistening olives, black and invisible, and on the sharp cheese that he handed her directly from the knife.  And she heard his voice without the words, dark and full, deep like the wine.  Its whole taste on her tongue, blending with her, blending with the night, spreading through her with no before or after, like conscious sleep.

“Sometimes,” he said, “I come up here at night and just wait.”

They sat for a moment, and she tucked her feet underneath her.

“What are you waiting for, then?” she said.

“I don’t know.  I don’t think I’m really waiting for anything.  Everything that’s going to happen to me is just going to happen.  It’s not like I want very much — a nice house, garden, children, someplace to do some good for people.  What everybody else wants, I suppose?”

She’d misunderstood the question, but he didn’t care because she was going to tell him what she wanted to tell him — either way.

She shook her head in the darkness, unaware that he could barely see her.

“I don’t know.  I like the law.  I like research.  I like what I’m doing.  But it’s just.” She weighted her words, “I’m going to miss all kinds of things just because I don’t know what they are.”

She stuck her glass into the light between them, and he splashed more wine into it.

“People like me — women like me, don’t have very much – okay.  We look good, not just good like attractive, our lives look good, and they are.  But nobody ever thinks about us.” She laughed sadly, “We’re the ones who get missed.  Overlooked.  It’s like our whole lives are clean and correct and nobody ever gives us a second thought.  You know what I mean?”

He did, but he wasn’t about to tell her she was doomed, and that was okay, too, because she didn’t wait for him to answer.

There were noises coming from below them, hard sounds that were stirring up the evening down there.  She felt them, felt annoyed by them, rushed by them.

“Just – just because I’m ordinary doesn’t mean I can’t have something.  I look around and I see my life and I know how it’s gonna go.  I can see it.  I’m gonna settle in and it’s gonna be so-o-o easy.  Career, children, grandchildren even, houses, cars — all that stuff — probably end up saving the whales or feeding the orphans or something like that, and sometimes I’ll even be able to convince myself that it’s all good enough.  But I’m gonna know it isn’t — secretly, I’m gonna know, and one day — one day — I’m gonna wake up and it’s gonna be too late.”

She paused, but there was no silence.  The music and the people noise from below was more now, larger, lapping up the slopes like rising water, impossible to ignore.

She stopped again to swallow.

She took a drink.

“Now.  Here’s this perfect night – we’re having this perfect night.  I’ve never had anything like this.” her voice trailed off so she could look into the darkness. “This is the most romantic thing that’s ever going to happen to me.”

He moved slightly so he could see her in the light.  She wasn’t looking at him, so he couldn’t really see her face.  But she saw him move and turned her head.  The light caught her eyes and they were shining in the dark, glistening with emotion.  She parted her lips and swallowed, aware of him.  Then, she lifted the wine glass and took a long drink.

“God!  I don’t know where all that came from.  You must think I’m just this total poor little rich bitch.  Way too much drama.  I’m not like that.  I’m really not.  It’s just the wine and…I didn’t mean to…”

She laughed and sniffed and turned her face away from him.

“We’re going to have to go soon, aren’t we?” She said, waving vaguely at the night.

“Not really.  It depends on how sick you want to be when the horde gets back to the hotel.”

“I don’t really care,” she said, leaning back.

But she was quiet after that.  Embarrassed.  Aware that the mood was crumbling under the persistent pulsing music and the vague voices and scattered shrills of sound that crawled in the air around them.  They sat together for a while, feeling it die, and when it was impossible to deny that the night was gone, they left.

This entry was posted on September 18, 2018 by wdfyfe in Fiction and tagged books, Fiction, literature, short stories, Women's Fiction.