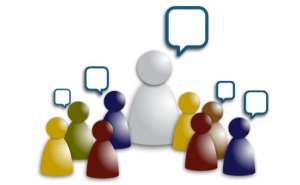 We all know people whose primary skill is to be annoying.  They may be nice folks, and we may even genuinely like them but invariably, in conversation, they always have to pull out the sandpaper.  Nothing seriously personal — no insults to your mother or major ideological differences just — nitpicky crap that rubs you the wrong way.  These are the folks who always have something to say, and, when they don’t, weasel the conversation around until they do.  Actually, it’s mostly the tone; just a note or two above superior but not quite nasal enough to be pompous ass.  They’re the ones who roll their eyes skyward when you start the conversation with, “I was at McDonald’s the other day…” as who should say “I’ve never tasted a Quarter Pounder.”  We all know they have, but we never say so.  We never stop the story and say, “Hey! Wait a minute, I knew you in college and you used to eat Ronny Mac eight times a week.”  And that’s the most annoying part of it all.  We let them get away with this stuff, and two days later, we’re still pissed off and rewriting the mental conversation.

We let these folks trample all over us is because it’s just too much trouble to stop everything and call them out.  We know if we do say, “Hey! Wait a minute!” we’re going to get a diatribe on the icky bits that go into the Chicken McNuggets or how the Shakes don’t melt in the blazing August sun.  (As if we didn’t know that already.)  Either that or it’s a forty minute travelogue of some quaint little hamburger place over in Funkytown where the chef/owner raises her own cows organically in the backyard, sprouts her own mustard and hand blends the secret sauce.  (Probably, ketchup and Thousand Islands!)  It’s not quite as bad as the vegetarian tirade but close.  Anyway, it’s just not worth it, and that’s what these people bank on.  They think they’re safe because the rest of us aren’t willing to stop cold and take them to task every time they open their mouths.

These people are ruining the world.

Once upon a time, it was perfectly acceptable to have an ordinary conversation: 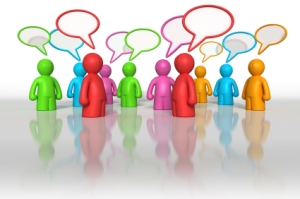 just a few people hanging out with each other.  We all heard what the other person had to say — like it or not — made the right noises in the right places and waited our turn to trot out our own semi-interesting stories.  It was great fun and how we got to know each other: the Golden Age of small talk.  These days, however, the irritating people have taken centre stage and we can’t get away from them.  They’re constantly trying to enlighten us to the perils of the world, the inequities of life and the finer things that only they have the inside track on.  They’ve turned the fine art of inane conversation into some sort of verbal tennis match where every innocent lob is returned with a Roger Federer drive to the net and overhand smash.  It’s like getting trapped in an elevator with a socially aware insurance salesman: eventually, everything gets back to “Serious” without ever having paused at “Who Cares.”

The problem is there’s nothing we can do about it.  Unless we want to turn every conversation into a low-level firefight we just have to stand there and take it.  Polite society dictates polite conversation.  Personally, however, I’m tired of the monologue on microbreweries, films with subtitles and anyone who has travelled anywhere.  I no longer admit I have a passport, occasionally drink soda pop or know how to read.  Nor do I celebrate major Western holidays, know where Africa is or understand the nuances of the LCD/LED TV.  (That last one’s true, by the way.)  I’ve discovered that it’s impossible to deal with these people.  They hold the floor like some 19th century slumlord — with just about as much benefit to the common good.

Unfortunately, since our society frowns on unleashing predators like me on these people, they are multiplying exponentially.  Eventually, all conversations will consist of a number of comatose heads, bobbing in unison, while several long-winded gasbags hold forth, ad infinitum.  No one will be able to hear (or care) what the other person is saying, and eventually, in polite good time, they’ll all just wander back to their smartphones, emails and text messages.

It’s a bleak future, but until we declare open season on these perpetual pains in the posterior, we’re doomed.