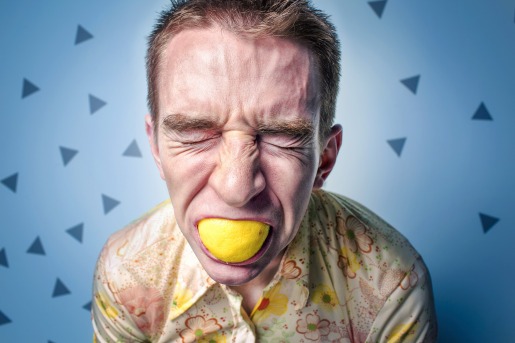 I’ve always thought that “When life hands you lemons, make lemonade” is a bunch of crap.  First of all, life better also provide you with a pitcher, some water, ice (optional) sugar, a knife and a wooden spoon — or your beverage-making adventure is over before it starts.  Secondly, if life is willing to furnish that kind of equipment, why not just hang out for a while and see if it’s got a bottle of vodka stashed away somewhere in that bag of tricks?  Which brings me to my main point.  These lemon-lifers are totally obsessed.  They haven’t even considered the possibility that life might hand out all manner of fruit and veg.  Why not?  I’m pretty sure there’s more than just citrus in the cornucopia of human existence.  So what happens when life gives you an apple?  Do you make a pie?  Sauce?  Strudel?

Okay, I get the allusion.  Life has some sour bits.  Duh!  My problem is there’s no reason to believe that’s the default mode.  The physical, spiritual and metaphorical laws of the universe suggest – no, dictate — that there are just as many sweet, juicy Valencia oranges available to life’s intrepid travellers as there are lemons.  Not to mention, strawberries, peaches, bananas and the occasional kiwi fruit.  In fact, to carry this fruit business to its logical conclusion, lemons are so hopelessly outnumbered that the odds of life actually giving you one are astronomical – unless, of course, you planted the tree yourself.

Old people are always making up stupid stuff to tell young people how to live their lives.  (Yeah?  If you’re so smart, how come ya got old?)  These “wise” old sayings used to show up on kitchen plaques and bumper stickers, but now they crawl around Facebook like ants at a picnic.  Most of them were thought up hundreds of years ago, when people had nothing to do but sit around and actually talk to each other.  Those days are gone.  So, as a public service, here’s a remix of just a few of these geriatric proverbs to reflect real life in the 21st century.

A journey of a thousand miles begins with a credit card.

If you can change just one person’s life … that really isn’t good enough, is it?

The meek shall inherit the Earth — until some ratbag lawyer decides to contest the will.
(This is not a comment about any particular ratbag lawyer, so forget about suing me!)

If at first you don’t succeed … there’s an App for that.

Money isn’t everything, but it’s sure as hell ahead of whatever’s in second place.

Do unto others — cuz eventually they’re going to show up and do unto you.

History repeats itself.  Cool!  I’m totally getting a dinosaur.

Sticks and stones may break my bones, but names – now, that’s the real problem.  They can cause deep psychological issues that last for decades.  We need to have trigger warnings on names.

The pen is mightier than the sword.  This is a joke, right?

Never put off ‘til tomorrow what you can do the day after tomorrow – or next week, or sometime in the near future, or ….

The road to hell is paved.  That’s why so many people go that way.

Seeing is believing — unless your friends have Photoshop.

When the going gets tough, most people wander away and watch Netflix.

Absence makes the heart grow fonder.  Out of sight out of mind.  Uh . . . I’m confused.

What doesn’t kill you can put you in intensive care for six months where you become addicted to painkillers.  Then, when you get out of the hospital, you spend all your money on illegal drugs, lose your job, your house and your wife leaves you.  Finally, you end up living on the street, eating out of garbage cans and selling your body to buy crack.  But, wow, are you ever strong!

Not that long ago, Social Media was being called the greatest gift to democracy since Jefferson.  How the mighty have fallen!  The problem is a) you don’t have to take an IQ test to own a computer and b) statistically, half the people who have computers would fail it if there was one.  The result is Social Media is over-populated by people on the bottom end of the “I’m-just-as-smart-as-you-are” scale, and the rest of us can’t disagree with them because that’s some kind of brain-shaming or something.  Meanwhile, these (for want of a better term) stupid people have reduced the conversation to the lowest common denominator which includes bashing everybody over the head with industrial-strength platitudes.  And, unfortunately, unlike cute cat videos, attaching deep meaning to meaningless clichés digs a deeper hole in the cyber-stupid and that just makes it harder and harder for any of us to get out.  Let me show you what I mean.

Bravery has many forms – No doubt — but not all bravery is created equal.  Somehow, we’ve forgotten that there’s a big difference between running into a burning building to save grandma and finally getting up enough courage to tell grandma we’re gay.  They’re not the same thing, and every time we equate the two, we devalue what courage really means.

Face Your Fears – I’m afraid of grizzly bears and I’m pretty sure that going mano a mano with a large North American land mammal is going to end badly– regardless of my personal growth.  Facing your fears only works when your fears can’t rip your face off.

People Can Surprise You – This isn’t always a good thing.  Like it or not, life dictates that we’re all going to accumulate more than a few substantial scars from getting stabbed in the back by people who’ve – uh — surprised us.

You Can Do Anything If You Try – This is why so many people think they’re creative, don’t want to do the grunt work and spend their entire lives pissed off with the world when they discover they have to.

Money Isn’t Everything – I’m not even going to grace this stupidity with an answer.

It’s Okay To Ask For Help – Yeah, but don’t be shocked out of your socks when you don’t get it.  Don’t believe me?  Ask your friends to help you move!

Don’t Give In To Hate – Folks, life isn’t a Star Wars trilogy!  There is no Dark Side that will suck you in and corrupt your soul.  I hate people who litter, and I don’t care what their motivation is.  Honestly, if it’s morally reprehensible, what’s wrong with a little hate?

Be Yourself – These days, everybody’s so wrapped up in being themselves they’ve totally forgotten that there are 8 billion other people on this planet.