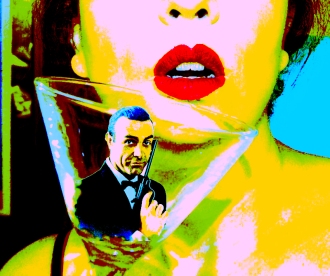 Last week, Sylvia Trench died.  She was 90 years old.  You’ve probably never heard of her, but she had a massive impact on popular culture that’s still ringing in our ears, today.  You see, before Honey Ryder (played by Ursula Andress) rose out of the surf like Venus in a white bikini, Sylvia Trench (played by Eunice Gayson) was the original Bond Girl in the original Bond movie, Dr. No.

Here in the ‘fraidy-cat days of contemporary feminism, there is a prevailing myth that “Bond Girl” is synonymous with bimbo.  Nope!  Guess again!  Ian Fleming didn’t write ‘em that way.  First of all, Fleming’s Bond Girls weren’t girls — they were women.  And secondly, the majority of his female characters (written between 1953 and 1965) were decidedly not typical women of that era.  Back in those days, the female ideal was June Cleaver (Leave it to Beaver) Margaret Anderson (Father Knows Best) and (let’s face it) the seriously ditzy Lucy Ricardo (I Love Lucy.)  Fleming’s women, on the other hand, were mainly independent, assertive professionals who were sexually active and made no bones about it.  (Ring any bells in 2018?)  Which brings us back to Ms. Trench.

Actually, Sylvia Trench was not in the novel Dr. No, but the movie version is the first time the world got a good look at James Bond, so she’s there to set the tone.   In fact, she appears before Bond does.  In the scene, we see a woman (not a girl) in an off-the-shoulder red dress.  She’s gambling at a high stakes Chemin de fer table.  She’s there by herself, and she’s clearly a regular player. (The house agrees to cover her marker when she loses.)  An off-camera voice says,

And the 007 film franchise begins.

However, this isn’t where Sylvia Trench leaves her mark as the quintessential Bond Woman.  Three scenes later, Bond returns home and there’s Sylvia, out of the red dress and into one of Bond’s shirts, practicing her putt – with Bond’s golf clubs.  Bond (because he’s Bond) bursts into the room with a gun in his hand, but Sylvia doesn’t freak out, shrieking “OMG!  He’s got a gun!” — she flirts.  This is a confident woman.  This is an Ian Fleming Woman.  She’s come to Bond’s apartment (broken in, actually) to sleep with him.  She hasn’t been seduced.  She hasn’t been coerced.  She isn’t a victim of Bond’s raging sexism.  She’s a woman who makes her own decisions — and today she’s decided on James Bond.

So, as feminists from Maine to Malibu theorize and chatter about how many misogynists can dance on the head of a pin — Ms. Trench, I salute you!  You were a woman before it was fashionable and saw no reason to complain about it.

Today is Daniel Craig’s birthday, and it’s not my intent to dump on the guy.  So, go out and have a great day, Danny, get some presents, and eat some cake.  Anything said here isn’t personal.  It’s in a wider context which you cannot possibly understand.  If you did, you’d go to the film franchise that is James Bond, turn in your tuxedo, your double O ranking, your License to Kill and resign.  In fact, you should have done it already, but alas…  Daniel, you are forgiven ‘cause you don’t know what you’re doin’.

James Bond is part of the Western culture that stretches back beyond Beowolf to the heroes of Greek mythology.  He has a place with Hercules.  He ranks with King Arthur’s knights, Robin Hood, Sherlock Holmes and Tarzan.  He is so intimately connected to what we are as a society that when you mention his name, nobody says, “Who?”  There are presidents, popes and kings who don’t command that kind of respect.  So why has 007 been turned into a pouty tough guy with a tentative jaw line?  Don’t answer that!  It’s a rhetorical question.  The damage has already been done. 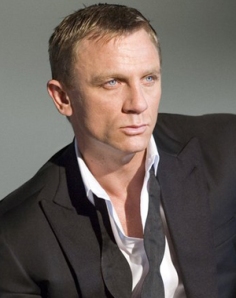 I’m not blaming Daniel Craig particularly.  There are producers, directors and writers who not only share the blame but are hugely responsible for it.  Craig is an actor.  He does what he’s told.  Of course, he could put a little more oomph into it, but these days actors are judged by their abs, not their oomph.  The real problem is it looks like everybody connected to the James Bond film franchise studied Bond at the Learning Annex.  It obvious they have never seen the other films and they have definitely never read the books.  If they had they wouldn’t be so cavalier with their portrayal.  They would treat James Bond with respect and quit making him look like Derek Zoolander with a pistol.

The current James Bond is based on one fundamental fallacy — he’s an antihero.  That assumption is so dead wrong if I were Ian Fleming, living or dead, I’d sue this current crowd of Bond makers for defamation of my character.  James Bond is not an antihero.  He’s not even an unlikely hero.  He’s a hero.  He’s quicker, smarter and mentally stronger than the average guy.  He has charm 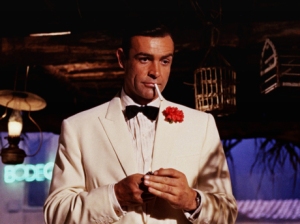 and charisma.  He does the right things for the right reasons.  He’s dedicated.  That’s why he has a Licence to Kill.  The licence is issued by the British government (for reference, see Sir Francis Drake’s Letters of Marque) under the proposition that when faced with a villain who is willing to blow up places like Miami (Emilio Largo in Thunderball) you don’t organize a discussion group — you shoot him.  (Where have we seen that scenario recently?)  And it is a Licence to Kill, not a licence to spray bullets around like some demented Rambo.

Playing Bond like an emotionally bankrupt thug is to diminish the purpose of Bond.  At root, James Bond is a civil servant.   He is a government worker, trained to do his job — just like a tax collector or a traffic warden.  I cannot emphasize this enough.  He is not a semi-loose cannon or a killing machine.  He gets up in the morning and goes to work, just like everybody else.  He has a desk and a secretary.  He doesn’t even have his own office.  He has to share with 008 and 011.  He has a demanding boss, and sometimes he gets bored.  Plus — and this is another rudimentary fact the current Bond people are missing — James Bond is a secret agent of the government.  Bond’s work, by its very nature, must be discreet.  This current guy leaves enough mayhem behind him to attract Lindsay Lohan’s three ring media circus.  If he had any higher a profile he’d be hosting Dancing with the Stars.

In the two Craig/Bond movies to date, James Bond is neither recognizable nor 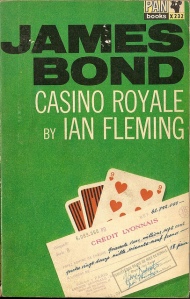 worthy of the name.  The last travesty, Quantum of Solace, isn’t even a real movie.  It’s a series of Mack Sennett chase scenes punctuated by random acts of destruction and numerous hard glances of tight-jawed “Blue Steel.”  Casino Royale at least had a story.

Speaking of which, there is a single scene in Casino Royale that sums up just how little the current Bond franchise knows about its raison d’etre.  In it, Bond breaks into M’s house.  Like hell!  James Bond would never do that.  It would never cross his mind, for any number of reasons, not the least of which is he has too much class.  Secondly, M would fire him on the spot, think about it over a whiskey, realize Bond had gone crazy and have him shot on his way home.  (Not a bad idea, given there’s another movie in the works.)

Anyway, Happy Birthday, Daniel Craig!  Jason Statham, where are you?