I blame MASH; not the book or the movie: the television series.  If it hadn’t been for it overstaying its welcome, we wouldn’t be fighting for our lives against the pandemic of pompous asses that have plagued us ever since.

Most people don’t know that MASH the entertainment franchise is based on MASH: A Novel about Three Doctors written by Richard Hooker (H. Richard Hornberger.)  It was a cute little comic novel based on the real-life mayhem at a Mobile Army Surgical Hospital during the Korean War and originally published in 1968.  This was right around the time that Mobile Army Surgical Hospitals in the Vietnam War were up to their elbows in real casualties – almost literally.  Therefore, even though it wasn’t a New York Times bestseller (at the time) it enjoyed a certain success; enough to attract the attention of Hollywood.  Within a year, a mediocre industrial film director named Robert Altman got hold of a screenplay from the book and filmed M*A*S*H with Donald Sutherland and Elliott Gould.  It came out in 1970.  Altman absolutely lucked out with a combination of nouveau cinema camera techniques and worldwide anti-war enthusiasm.  It also didn’t hurt that the movie was black dog hilarious for the time.  It won the Palme d’Or at the Cannes Film Festival and a handful of Oscar nominations.  Interestingly, it’s only Oscar was for Best Screenplay, written by Ring Lardner Jr.  Television executives have never been accused of not cashing in on a good thing, so MASH, the television series, premiered on CBS two years later — on September 17th, 1972.  Nobody paid much attention to it at first, but then it was rescheduled behind Norman Lear’s All in the Family (the Amos and Andy of the 70s) and a star was born.  His name was Alan Alda.

Before 1972, Alan Alda was a permanent TV guest star and a recurring panellist on I’ve Got a Secret and What’s My Line? – two TV programs that are difficult to explain to a 21st century audience.  His only starring role was as George Plimpton in Paper Tiger (a movie I’m sure has only been seen by me and nobody else I know.)  However, Alda is a good actor and when he landed the role of Hawkeye Pierce (Donald Sutherland in the movie) he must have thought he’d died and gone to celebrity heaven.

He probably didn’t realize how long heaven was going to last.  MASH was on television for eleven years — nearly four times as long as the Korean War itself and about twice as long as it should have been.  I’m sure that more wounded soldiers came through the fictional 4077 MASH unit than actually fought the war – on both sides.  In the end, only Hawkeye and Hotlips (although nobody called her Hotlips anymore) remained out of the original cast, and they were treating industrial accidents from the local Hydunai factory.  Most importantly though, Alan Alda singlehandedly not only destroyed a perfectly good bit of television comic relief but made it socially acceptable to be an utter know-it-all jerk.

Here’s a bit of background.  The book and the movie make clear that Benjamin Franklin Pierce is a good doctor.  He finds himself trapped in a hell-hatched netherworld where doctoring is fast-tracked into something called “meatball surgery” — a lot of blood, stress you could hit with a hammer, and no end in sight.  Pierce and his buddies, however (like young people everywhere) think they can make the best of a bad situation by adding large quantities of alcohol and an active libido.  They believe this will somehow balance the absurdity of war.  The result is a bunch of antics about the Korean War that we’re never going to read in the history books but that probably happened, all the same.  (I’ve heard similar tales out of Vietnam.)  The important point is, never, at any time — in neither the book nor the movie — does Hawkeye Pierce start shooting his mouth off about macro-vision moral values.  He’s just trying to get himself out of the war in one piece, with his sanity still intact.

Back to 1972!  In the beginning, Alan Alda’s Hawkeye was recognizably the same guy from the movie, if not the book.  For example he never delivered Pierce’s signature “Finest kind” line with any believability.  But somewhere after the second season, it all went to his head and he started playing Pierce like a morally superior Groucho Marx with a knife in his hand.  He became a wiseass, and a mean one at that.  Not only that, but he was always right.  The guy ran around

like he was the smartest person in the Korean theatre of war, and he was always willing to tell you about it.  There was no problem — medical or otherwise — that he didn’t have the inside scoop on, and it became increasingly apparent that he thought he was surrounded by idiots.  It got so bad that Trapper John got fed up and cleared off without even a “See ya later.”  (FYI Trapper was killed by Adam Cartwright’s grandson, who assumed his identity and took over his medical practice in San Francisco.)  He was replaced by B.J. Hunnicutt, a perfectly bland second banana, who oozed smarm so thick you could cut it with a scalpel.  Pierce may not have chased everybody off the show, but there were more casualties among the actors than there were in the operating room.  The only supporting cast left at the end were Klinger — a TV invention — and Father Mulcahy
— who had to forgive him.

That wasn’t the worse of it, though.  For at least the last six seasons and maybe more, Hawkeye Pierce acted as if his superior understanding trumped all other ideas and observations.  The show was written so that every week Pierce showed up the blaring inadequacies of everyone around him and made fun of them while he was doing it.  There was no moral question he didn’t have an answer for and no social injustice he couldn’t mend; meanwhile solving serious medical emergencies as an afterthought.  And all of this was delivered with a smart ass insult!  The guy didn’t just take the moral high ground: he landscaped it, built a house and settled in for the duration. 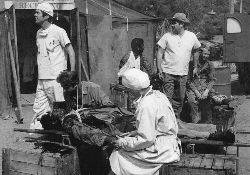 Before Alan Alda, Hawkeye Pierce was the type of guy you wanted to be around.  He was good at what he did and fun in the off hours.  After Alda, Pierce became the quintessential pompous ass, and since he was beamed into millions of living rooms every week (and still is) it’s now socially acceptable.  We’ve all met them.  He’s the guy (and they’re usually guys) who shows up with this whole “Bite me!  I’m smarter than you are.” attitude.  He always has all the answers even though you didn’t ask any of the questions.

Poor Benjamin Franklin Pierce became the prototype of our contemporary oh-so-superior man and unfortunately, since then, they’ve been mass produced.