Believe it or not, it’s finally Spring, and to prove it, people all over the country are taking off their clothes.  Suddenly necklines and hemlines are jockeying each other for position, waistbands are so low as to violate the natural laws of decency anywhere north of the equator, and, to coin an old joke, the girls are just as bad.  Personally, I’m no follower of fashion; I have my time and I’m never going to leave it.  Nor am I old enough to berate young people for wearing the same things I wore at their age.  I really don’t care much about fashions, where they came from, where they’ve been or how they got here.  Besides, I know enough about history to understand this too shall pass, and if you keep your clothes long enough, eventually they won’t fit.

However, I’ve noticed a distinct pattern in women’s clothing over the last 100 years.  I’m not sure whether history follows fashion or vice versa, but in general, turbulent, troubled times favour the neckline, whereas affluent, settled times favour the hemline.  I’m not going to speculate on the pop psychology of all this, but here’s a brief history.  You can make up your own mind.

In the days just before World War I, most of Europe simply couldn’t wait to start shooting at each other.  The world was in a mess.  From Morocco to the Balkans, every second Tuesday brought another world crisis. There were petty wars everywhere and everyone with a trigger 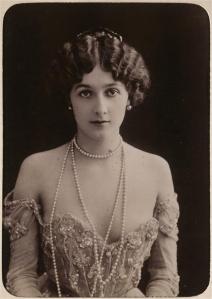 finger was itching to use it.  Female fashions were dictated by the Gibson Girl, an hourglass figure with a bust size big enough to topple over on an incline.  From the French salon to the Russian Imperial court, bare shoulders and décolletage were de rigueur for aristocratic women.  And as the world trudged irrevocably towards all-consuming war, the plunging necklines got so extreme various churches spoke out against the style.  Luckily, World War I broke out in 1914 or modesty would have been lost forever.

The minute the war was over and Johnny came marching home again, he discovered that the world was his oyster.  The Roaring 20s were one big drunken bash.  People everywhere were partying on the imaginary cash they were making on the stock market.  Even Prohibition couldn’t slow down the dance.  Meanwhile women’s fashion now favoured the flapper.  She was a straight up and down girl with bobbed (short) hair, a

receding bustline and no hips.  She wore the shortest skirts since Ramses the Half Naked built the Sphinx and the only cleavage available was the one visible from her backless gown.  This fashion disappeared almost instantaneously on October 24th, 1929 when the New York Stock Market crashed and everybody had to get serious again.

In the 30s, women buttoned up and the hemlines dropped to the ankles.  As the Depression deepened and the bad guys, Hitler and Mussolini, started marching, females took on a distinctly military look.  They wore jackets that covered their hips and artificially squared their shoulders.  Unlike the last time the world tried to kill itself, this time fashion was going to war.  Throughout the 40s, women remained broad shouldered; the hourglass was out, and the linebacker was in.  Just take a look at the Andrews Sisters to get a feel for it.

As the 40s slowly gave way to the 50s, and nuclear weapons brought a clear and present danger that humans could extinguish all life on the planet, women stacked on the petticoats again.  They wore a starched apparatus called the crinoline which flared at the hips so abruptly it completely disguised the female figure.  They also wore pullover sweaters, lightweight and tight, which combined with the sturdy bras of the time made the protruding parts look like they’d been put in a pencil sharpener.  This was the Sweater Girl Look that lasted well into the 60s.  It was the time of Jayne Mansfield, Marilyn Monroe and ever threatening nuclear holocaust.

But there was also a fashion schizophrenia going on in the 50s.  Employment was high, money was plentiful and the suburbs were solid and sturdy.  Everybody and her boyfriend had a car.  These conditions gave us a few fashion anomalies.  There were the B-grade science fiction movies for example, where the sweaters were tight and the skirts were flared and short.  Most notably, the bikini was a half naked salute to the sun and the Pacific islands of the Bikini Atoll, where, in 1946, the United States military detonated nuclear hell and wiped out paradise in six and a half seconds.

The 60s going on 70s was the last time female fashions were a single mass market.  Despite what historians tell us about protest and discord, the 60s were a drug-induced fiesta.  Young people might have protested during the day, but at night, pot and peyote ruled, music and dance were primitive, birth control was quick and easy and so was sex.  The party didn’t stop until Nixon’s National Guard took matters into their own hands at Kent State in 1970.   In 1965, Mary Quant introduced the

miniskirt; $6.95 worth of fabric that covered the bare necessities.  Later she would go even further with the micro-mini and hemlines disappeared entirely.  The first supermodel, appropriately named Twiggy, drove the female form to the very edge of annihilation.  Thin was in so completely that the old-fashioned flapper looked positively voluptuous.  The little black dress became essential day, evening and professional wear, and women everywhere learned to bend at the knees.  The fashion 60s culminated when Ms. Quant premiered hot pants, an ill-conceived gesture to modesty that was snatched up by strippers and prostitutes around the world and has since been in continuous use.

The last days of dictated fashion came with disco.  In reaction to the Women’s Movement and the rise of feminism, fashion designers took to adorning men: the polyester leisure suit is the symbol of the age.  When disco died, prominent male fashion died with it.

For the last two decades of the 20th century, fashion was not so much about style as trend.  There were no overwhelmingly accepted forms of dress; however, both men and women did follow a number of trends religiously.  Hemlines and necklines made minor seasonal adjustments up and down, in quick reaction to the state of the world, but most fashion remained in flux.  There was, however, one female feature that did distinguish itself – the bum. 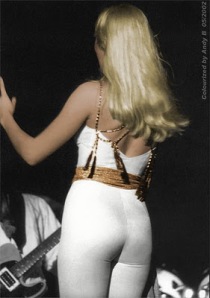 Introduced in Australia, in 1977, by Abba singer Agnetha Faltskog, the bum has dominated fashion ever since.  It shows up everywhere and has become the single fashion constant in a world that gyrates wildly between feast and famine.  Clothes have tightened up proportionately to display the bum prominently, and in some cases, silicon has been added to enhance its features.  Even today, in the 21st century, the bum remains front and centre on the fashion scene; Jennifer Lopez and the Kardashian sister are perfect examples.

Personally, I think the bum is a passing fancy and the fashion world is just catching its breath and waiting for another party or crisis to right itself.  In my mind, history will win out, but you can make up your own mind.

2 thoughts on “Fashion: A history of the 20th Century”