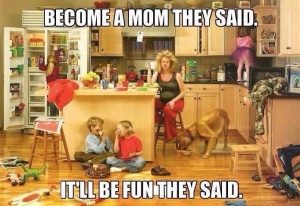 Sunday is Mother’s Day, and for one brief shining moment, we’re going to be up to our elbows in flowers, chocolates and long-distance phone calls.  But it’s not all knickknacks and Netflix for mom this year.  Unfortunately, in recent history, our annual binge of maternal appreciation has taken on a darker tone.  Running just under the radar, there’s a dirty little war going on.  Moms everywhere are forming alliances, and across Social Media and the blogosphere, they’re speaking out.  Wrapped in their all-too-altruistic concern for better parenting, they’re sending each other one unequivocal message: “Hey, bitch!  You’re doing it wrong!”

Nobody knows who cast the first nasty, but it’s generally agreed that by the time Stay-at-Home Moms went public with their concerns over Working Moms’ lack of maternal instincts, the gloves were already off.  Working Moms responded by mentioning that all women face choices and some choose to utilize their additional talents to balance two jobs well, rather than one badly.  Seeing an opportunity, Hover (Helicopter?) Moms worried that downloading parental responsibility to institutions such as Daycare tears apart the natural genetic bond between mother and child.  At that point, Non-biological Moms, stung by the innuendo, pointed out that historically their image had been tarnished by fairytale depictions of the evil stepmother.  They went on to blame corporate giant Disney for perpetuating this stereotype.  Seizing an opportunity, Gay and Lesbian Moms declared their support for Non-biological Moms but wanted to raise awareness that they, too, had been victimized by Disney and called for a boycott of the corporate giant.  New Moms saw this as a direct attack on their own recent history and (while maintaining their tolerance for sexual orientation) wanted to know what was wrong with giving children positive role models like Elsa, Merida and Belle.  This was when Organic Moms and New Age Moms came together to admonish the film industry for not providing healthy snacks in movie theatres.  They went on to showcase several hundred DIY, chemical-free recipes for children and the whole family.  This resulted in an angry outburst from Single Moms who said they didn’t have the time or the money to grow their own oranges and quinoa, and somebody should get real for Christ’s sake.  Designer Moms immediately called for tolerance and voiced their concern that being a mom was all about parenting, not politics and (according to Criada, the nanny) free-range quinoa was available several places on the other side of town.  Free-Range Moms, upon hearing the words “free-range,” grabbed their kids, who had been playing in the backyard, and hid them in the basement, in fear that the cops and social services would come and take them away.

This is only the briefest synopsis and, no, it’s not pretty.  Personally, I live in hope that this Mother’s Day, moms all over the world will stop, take three deep breaths, forget their differences, and remember that all moms have one overwhelming thing in common: at some point, they didn’t practice safe sex.