Letterman And The Ladies 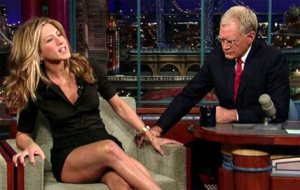 I know this is too soon — but I can’t believe everybody is still sucking up to Letterman.  These days, to hear the story, he was the best thing since sliced bread met peanut butter and jelly.  God, it’s like the guy died or something!  Let’s be honest: Letterman hasn’t been funny since Ronnie Reagan ruled the world, and even then, he wasn’t much more than a pumped-up smartass.  Plus, and this is the weird thing, nobody’s talking about what Dave did best.  He beat the system.  Anybody else would have been bounced out of the Ed Sullivan Theatre for half of what Letterman got away with.

There are not many Strictly Verbotens in the land of high end celebrity.  However, one of the strictest is rich and powerful old men cannot have sex with their younger, poor and powerless female employees.  At the very least, this is sexual harassment, and at the other end of the scale it’s something a whole lot slimier.  During his TV career, David Letterman crossed this line — more than once and for extended periods — and in 2009, when circumstances backed him into a corner, he finally admitted it — on national TV.  Strangely enough, there was no public outcry, no group came forward to demand justice for the women or even advocate their protection and nobody — nobody — even suggested Letterman might be held accountable for his actions.  In fact, nothing happened.  Wow!

But, let’s get real.  The reality is it’s very difficult to point out the sinner when he’s the one who has the pulpit.  In 2009, Letterman had a huge audience — every night — and some very powerful friends.  He had a sharp comedic tongue and a roomful of badass writers to back him up.  Plus, over the years, he’d demonstrated that being on the wrong side of David Letterman was not a place you wanted to be.  Actually, it’s no wonder no one ever accused him of anything.  Personally, I’m not that brave.

The result was he walked away from the scandal unscathed, the women were never heard of again, and now Letterman is retiring with all the accolades of the comic genius he never was.  The thing I don’t understand is why are people kicking each other out of the way to praise the guy when anybody else would have been fired six years ago?

This entry was posted on May 22, 2015 by wdfyfe in Culture, Entertainment, Social Media and tagged David Letterman, Letterman, sexual harassment, Television.