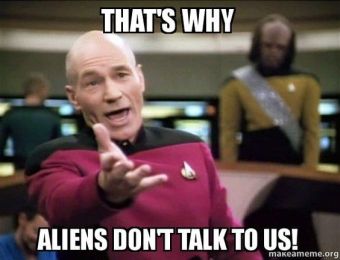 Unless you flunked out of Math, Science, Stats, Probability, Literature, Philosophy, Biology and Logic — all at the same time — you realize that millions of galaxies, billions of stars and trillions of planets equal a damn good chance that there is intelligent life (besides us) somewhere in the Universe.  It just makes sense, right?

So why won’t aliens talk to us?

BTW, Bubba and Bobbi-Sue’s shaky iPhone video of the sun glinting off a Frisbee™ doesn’t constitute alien contact.  And — just for the record — aliens probably have better things to do with their time than probe fat guys, lose their skulls in Central America or leave painfully childish clues to their existence for weirdo TV documentary film makers to find.  (Just sayin’!)

So, with no credible evidence, we must assume that aliens simply don’t want to talk to us.  Why?

I think that they think we’re strange.  And not just regular isn’t-that-cute strange, either.  Let me give you a few examples to demonstrate:

Cricket — Try explaining this to somebody who doesn’t already understand the game.  It’s the only sporting activity that stops for whiskey, tea, sandwiches, dessert and a cigar, and comes with a warning label, “May cause soul-eating boredom, severe depression and thoughts of suicide.”  And this is what some humans consider fun?

English Spelling — Whoever thought up the rules for spelling English words was drunk, stoned and stupid.  The letters, the sounds and the phonics are not even close, and for non-English speakers, it must look as if every word has its very own set of rules.  Good luck translating that into anything beyond Klingon!

Yoga Pants — What would you think if you were an alien?

DIY Television Programs — The guy on TV uses the same material, tools and technique as I do, plus I follow his instructions to the letter.  However, his birdfeeder looks as if  it were hand crafted by the Elves of Lothlorien, whereas mine looks like it was hammered together by the Orcs of Mordor.  There is no justice on this planet.  (Aliens can sense this.)

But the real reason aliens don’t talk to us (among tons of others.)

Crop Circles — Aliens must sit around their flying saucers laughing their various body parts off.  Here we humans are, the dominant species on this planet, and we’re so dumbass stupid we believe that intelligent beings, clearly capable of intergalactic travel, are attempting to communicate by stumbling around Southern England in the middle of the night, making geometric designs in corn fields?  On what level is this even close to being reasonable?

Or maybe it’s just simply that aliens would rather talk to chickens. After all, they’re obviously not interested in us.

One thought on “Why Aliens Won’t Talk To Us”