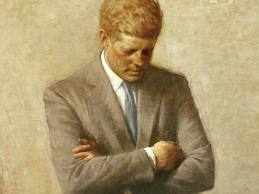 My generation has survived earthquakes, famine, Disco, AIDS, the End of the World (several times) and Richard Nixon.  For all our relentless whining, we’re actually a tough bunch of folks.  However, we are about to be tested as no generation before us has ever been.  Let me be the canary in the mineshaft and warn all humanity that, for the next nine months (about the same amount of time it took Rosemary to have that baby) we’re going to be up to our elbows in John Fitzgerald Kennedy – and it’s not going be pretty.  You might not have heard – but you will – that this is the 50th anniversary of his assassination.  From now until November 22nd, we’re going to be subjected to solid walls of JFK.

Before I get too deep into full-throated rhetoric, I want you to know that I believe John Kennedy was a good president.  He wasn’t necessarily Mount Rushmore great, but, as CEOs of the American Empire go, he’s definitely somewhere on the top end of the middle group.  The problem is it’s hard to judge.  We tend to credit him with initiating the good stuff (like civil rights) and to hand Lyndon Johnson the blame for mistakes (like Vietnam.)  What we forget is that Kennedy merely set the tone for both.  He didn’t have enough time to formulate policy.  It was Johnson who had to handle the follow-through and, alternatively, clean up the mess.  It’s this fundamental oversight that makes me wary of the approaching media tsunami.

We love JFK more for the idea of him than the man himself.  We want to believe that once there was a Camelot: a place where a bold young king gathered “the best and the brightest” around him, to spread peace and prosperity throughout the land.  An All-American America where daring New Frontier knights joined battle equally with the suits of things like corporate steel as well as the hard men of organized crime.  A place where lawyers used the honest tools of the law, not the loopholes; a place where journalists were honourable and money lenders trustworthy.  A place where smarts and the arts weren’t sins; where painters and poets rubbed shoulders with scientists and engineers; where university dons played metaphorical (and sometimes real) touch football with their political masters, each learning from each.  A place where race didn’t matter and our only adversaries were poverty and ignorance.  We want to believe that — for one brief, shining moment — the great tribes of America spoke with one voice; a voice that said we can do anything if we try.  We want to believe this because those of us who were there think we saw it happen.

Unfortunately, fifty-year-old memories have a way of clouding and fading and distorting the truth.

Fifty years ago, my generation was in the first bloom of immortal youth.  We see those years as a time of “sunshine, lollipops and

rainbows … brighter than a lucky penny.”  The Kennedy presidency is that tangible talisman that still tells us how young and unafraid we were.  We hold it dear to our hearts.  Yet it also holds the sum of all our regrets — all the shoulda, coulda things we woulda done if Lee Harvey Oswald had just called in sick that day.

For the last half century, day-late/dollar-short Cassandras have been turning history into legend, reworking JFK into the once and future king, soothsaying all the wonderful things he might have been.  Now, the Kennedy Camelot is about to get a modern-day makeover, courtesy of our ubiquitous media who can’t wait to cash in on an aging population, eager to squeeze in one last Look-At-Me.  They’re going to do it, too — and with all the spin that money can buy.  And Kennedy’s Camelot will take its place alongside Avalon, Shangri-La and Xanadu — unrecognizable to anybody but the myth makers.