It’s hard to live in a time when the gods are changing, but it’s loads of fun, too.  This transitional world we live in is so full of cool it’s difficult to sort things out.  So many neat things are going on right now that I’m totally pissed I’m never going to see where they end up in 50 or 100 years.  Honestly, I haven’t completely comprehended our world since back in the 20th century.  Sometime around the Y2K scam, I started to lose track, and even though I faked it for a couple more years, the gaps in my understanding just got too big.  Now, like old underwear, there are far too many holes in my knowledge to ever claim decency again.  Fortunately, the world has gotten so large that I can just narrow my focus, avoid the stuff I don’t recognize, and keep on moving.  There are certain things that I miss from the old world, though; things that were quaint and homey and comfortable.

For example, I miss quiet contemplation on the bus.  In the olden

days, people on buses used to sit there, stunned, staring straight ahead.  They read books and newspapers.  They decided what to have for dinner.  They mulled over their problems.  They carried open bags with their new possessions in them.  Sometimes, they talked to each other in that secret mono-voice reserved for private words in public places.  They looked out the windows and thought about their lovers.  Buses were romantic places.  These days, buses are full of people who stand when there are seats available and boldly declare to their invisible friends that they are indeed on the bus.

I miss babysitters, too.  I think it’s too bad that a whole generation of young people are probably going to have to resort to prostitution to pay for their music and hairstyles.  Babysitters should have been made an essential service — years ago.  They allow us to have time.  Sometimes, adults need adults only.  There’s something relaxing about having a second cup of coffee after dinner when somebody else is going to do the dishes.

Restaurants are made for love affairs because they capture time for the person you’re with.  A few years ago, the one requirement for a quiet evening like this was that the chairs in the restaurant weren’t made of plastic.  These days, however, most restaurants offer complimentary crying babies or young families eager to share their experience.  It’s difficult to have a trivial conversation when 4-year-old Kay-lee (with a K) at the next table is pffting her potatoes and going for distance.  In the olden days, a good babysitter would have saved both those marriages.

And I miss newspapers: those big Sunday thumpers that killed half a

forest to make and half a morning to read.  They had complete sections that you could trade across the breakfast table.  They were big enough to fold, so you could drink your morning coffee.  They were lazy with long stories.  They had movies you wanted to see and places you wanted to go.  They had columnists from faraway Chicago and Frisco, who caused discussions and arguments, and the loser made breakfast.  And they had crossword puzzles that might take all day — even with help.  Today, news and opinion are a solitary business backlit and scrolling, rushed through on our way to somewhere else, over a breakfast we can eat with our hands. 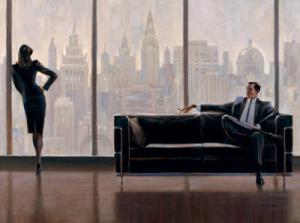 And I don’t like “relationships.”  They’re artificial affairs.  They’re built on the premise that the squiggy feeling in the bottom of your belly has a beginning, a middle and an end.  They take too much thought and are almost corporate in their planning.  Following their path is like playing a video game where each success leads you to the next level — more difficult with bigger dangers – until, finally, it’s too familiar to play anymore.  I prefer the olden days when people had love affairs that began by accident — at places like bus stops.  They took time to unfold, over longer and longer, long evenings.  And even though they always began as separate adventures, unlike relationships, love affairs got passed back and forth so many times that they became a jungle of intertwisted experience that can never be understood separately again.

This isn’t a brave new world we live in; it’s a brilliant place, with new and exciting things going on, all the time.   And even though, most days, I can’t wait for tomorrow, I still like the feel of yesterday.