I love the Internet, but here are a few casualties of our increasing dependence on technology — Part Two.

Memory — Remember Algebra?  Neither do I.  It’s not important to me.  Nor do I remember the atomic number of zinc, how to spell concieve (conceive?) or the names of some of those odd little countries that used to be the Soviet Union.  I don’t remember any of that stuff.   But the Internet does.  It remembers everything.  Unfortunately, because of that, I don’t remember my Aunt Vera’s mailing address either, or my sister’s telephone number, or most of my friends’ birthdays — and these things are important to me.  My point is, for most of human history, people remembered things.  In fact, when stuff was really, really important, they carved it into stone — just in case.  However, since the Internet, we don’t remember much of anything — important or not.  We let the Internet do it for us and trust that some evil little hacker from Kazakhstan, Uzbekistan or Azerbaijan doesn’t get pissed off, one rainy winter evening, and wipe it all out.

Bricks and Mortar Stores — When I was a kid, the butcher used to call my mother “Mrs. Fyfe.”  My sisters used to flirt with the checkout clerks at the grocery store.  My dad knew the guys at the lumberyard — by name.  And, once, the girl at the bookstore hid the last copy of Welcome To The Monkey House under the counter for me.  These were not unusual occurrences.  Everybody my age has similar experiences.  These days, however, I haven’t been to a bookstore since I discovered Amazon because there aren’t any left in my neighbourhood.  (I’m not sure which happened first.)  I just bought a Roomba and the first time I saw it was when I opened the box.  I shop at a grocery store that’s so large it needs its own GPS and find myself envying people in England who can shop at Tesco from the privacy of their own pajamas.  We are the last generation of touch-and-feel retail.

Blood and Bones People — I have nieces and nephews I haven’t seen since they were children, but I recognize their husbands and wives.  I’ve seen their homes, know what they eat for dinner, where they go on vacation and what they do for fun.  I’ve had conversations (and arguments) with people I don’t even know.  Strangers compliment me every day.  I play games with people who don’t have names and might very well be figments of a digital imagination.  And I have no idea where many of my friends live because I’ve never met them. The truth is, even though we might not want to admit it, in the 21st century, most of us have just as much human contact online as we do face-to-face.  The problem is electronic people might LOL but they don’t laugh; they can emoji, but they can’t cry.  They don’t spill their wine, ruin your makeup, squeeze your hand, slurp their soup, or kiss you goodbye.  And it is this indisputable fact — more than what and how we remember, or where and when we shop — that’s changing our society more radically and rapidly than ever before in human history.

I love the Internet, but here are a few casualties of our increasing dependence on technology.

Telephone Books — One of the first was the telephone book.  When I was a kid, everybody had a telephone book.  The first thing you did when you got a new one was find yourself in it.  It was an opportunity, as a little kid, to actually see that you had a place in the bigger world.  However, the best use of the telephone book was, on lazy afternoons, looking up people with funny names.  One year, Mrs. Cranston’s entire 4th grade class laughed for weeks when Marvin L. Ramsbottom moved to town.

Maps — Before the Internet, maps had the ability not only to place you in the world physically but to distinguish you from the billions of other humans occupying it –philosophically.  Back in the day, every kid knew this and to prove it they would eventually write their name, their address, their city, their county, their state or province, their country, their continent, their hemisphere, Earth, The Solar System, The Milky Way, The Universe.  And it all started with a little finger pointing on a map.  Practically, however, maps were the exclusive property of dads and were notorious for being badly folded, badly drawn and just plain wrong.  Eventually, all maps ended in a parental argument over exactly when to abandon middle-class machismo, stop the car and ask for directions.

Money — Incredible as it may seem, before the Internet, money was a tangible object.  It had weight.  It made a noise.  It told us just exactly where we stood in the world — because it was finite.  We either had enough money or we didn’t, and after a few trial and error disappointments, we discovered that the world is full of choices.  When bus fare, movie and popcorn were beyond our financial capability — somebody was going to walk.  Of course, all kids knew money was important because their parents were constantly reminding them that a) they (the parents) weren’t made of money, b) it didn’t grow on trees and c) they weren’t going to throw good money away on that (whatever it was we thought we wanted.)

So, what have we learned?

1 — Smart phones have put us all in me-and-mine electronic ghettos.
2 — Technology doesn’t give a rat’s ass about our unique position in the world.
3 — The near infinite nature of digital money has destroyed our ability to make decisions.
4 — Technology can suck the fun out of life. 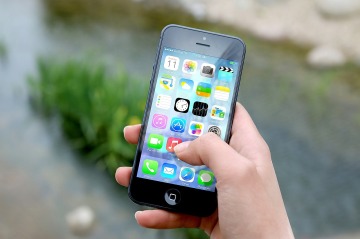 Sweet Jesus!  If you have any mercy in your soul, please save us from yet another piece of useless electronic crap.  How many different phones do we need?  Enough is enough already!  Look, it doesn’t matter whether the iPhone SuperGalaxy S9 is two millimetres shorter than the SuperGalaxy S iPhone 17 or not.  It’s the same damn phone!  It runs the same Apps, streams the same brain-chewing videos and posts the same stupid bathroom mirror selfie to Instagram.  Newsflash!  Size doesn’t matter: it’s the same technology!  It’s time the scientific community pulled their thumbs out of their collective orifices and developed some Phone Apps that we, the people, actually need.

We need a Phone App that automatically calculates the calories in the Double Mountain Chocolate Mocha-Mocha Cake-a-Thon we just ordered for lunch.  It needs to sound an alarm, flash, buzz and in the voice of our hottest ex-girlfriend shout, “Put the fork down, you fat bastard!  No wonder I left you!” over and over again — until we leave the restaurant.

Or an App that remembers how many drinks we’ve had and, somewhere in the middle of four, automatically telephones our mother, our sister, both our grandmothers, our boss, the Archbishop of Canterbury and Alcoholics Anonymous — not necessarily in that order.

Or perhaps an App that measures the ass groove we’re binge-watching into the sofa and automatically shuts down Netflix until either the groove or our asses lose a couple of centimetres.

Or maybe an App that can analyze the guest lists of dinner and cocktail parties, calculate the exact moment we’re going to be bored out of our minds, and automatically phone the police to report a kidnapping.

And finally, the very best for last:

What about a Fitbit bracelet that not only programs our daily “Fitness Goals” but monitors our progress and, when we don’t achieve them, activates a Taser that zaps the shit out of us until we do?

These are things the world needs — not more pixels on itty bitty screens.