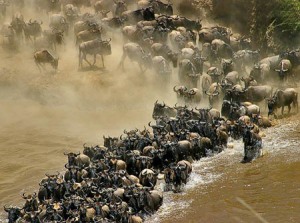 When I was a kid, long before Disney rewrote Hamlet into The Lion King, there were African nature programs.  They were all pretty much the same.  They featured one or two hairy somethings, with human personalities, waddling around, having adventures.  At some point, before the first commercial, an anonymous zebra would get eaten — just to prove things were serious.  Then the creature, whoever he was, would get into a couple of close scrapes himself.  In the end, however, the hero would survive, learn the tricks of the trade, and a new crew of little hairy somethings would emerge from the den.   Basically, it was the circle of life, Grasshopper — with a jugular and some big, ugly teeth.

The one I liked the best, though, was the one about the migration of the gnus (wildebeests, if you’re South African.)  It still wows me that one minute there’s this big herd of gnus, just hanging out on the Serengeti.  Then, one of them turns to his buddy and says, “Man, this place is totally lame.  I’m going south.”  Suddenly a couple of million herbivores are on the move.  Without thought or discussion – they’re just going — and dragging zebras and antelope with them.

The group mind is fascinating in its simplicity.  I’ve seen this happen with 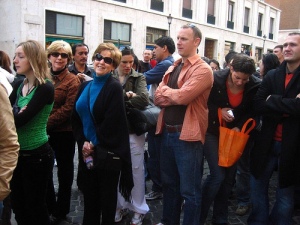 people.  You’re standing in line, waiting for a movie or a bus, and one guy shuffles a half-step forward.  Everybody in the line suddenly perks up and readjusts (even the people in front of him, where it doesn’t matter.)  Agitate that line and the people will start to bunch up towards the front; irritate them, and they’ll start banging on the door; piss them off, and you’ve got a mob.  It’s all just group think accelerated.  More importantly, though, the reverse is also true.  Group think it’s really just a mob in slow motion.

The problem with a mob, regardless of what speed it’s travelling at, is it doesn’t think.  You’ve never heard of a lynch thoughtful discussion.  When somebody’s about to swing, it’s always a mob who’s holding the rope.  Those townspeople going after Frankenstein with torches and pitchforks aren’t about to listen to reasonable arguments for and against; they’re out to put a hurtin’ on somebody – or something.  The crowd screaming for the blood of Christ didn’t care if they had to suck up to the eternally-hated Romans to get it, and flogging wasn’t going to be good enough because they’d already bought the hammer and nails.  A couple of centuries later, everybody’s sorry about that (After all, the “Do onto others…” thing is a pretty cool philosophy) but at the time, crucifixion seemed like a grand idea.  But group think isn’t just about frustration and shouting and spur-of-the-moment homicide.  It runs deeper than that.  Group think bends the rules of reasonable discussion.  It turns secular examination into religious fervour. 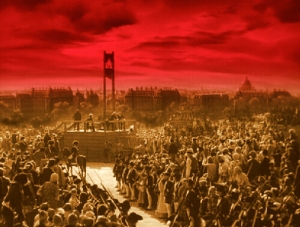 The very best example of this?  A couple of hundred years ago, in September, 1793, Robespierre and some of his amis were sitting around Paris with a revolution on their hands.  They formed the Committee of Public Safety and started chopping off heads.  By the time they were done, somewhere between 20 and 40 thousand people had been whacked; ironically, most of them peasants.  What we now call The Reign of Terror, ended only when it began to eat its own and Robespierre himself had to kneel before Mademoiselle La Guillotine and lose his head.   But for ten months, the Committee murdered people (There’s no other way to say it) relentlessly, day after day – and here’s the kicker – in full view, and with the public’s approval.  This is group think at its worst.   This isn’t the flare of a mob breaking innocent windows.  It’s the body politic, so intoxicated with its own righteousness that it calmly, carefully, convinces itself that it holds the moral authority to anoint the saints and punish the sinners.

When group think controls the agenda of a nation, honest people are fooled into believing the words of the demagogue.  They abandon rational thought for the fears and tears of emotion.  They hold no reference to reason but follow the wild-eyed cries of the crowd, metaphorically rending their garments.   As the tumult of the time builds, otherwise discerning people follow the loudest voice.  The slow and thoughtful sounds of logic are shouted down by misplaced passion.  Thinking itself staggers under the weight of the tyranny of thoughtless, unexamined belief. 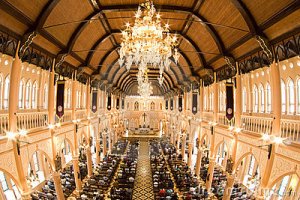 Here in Canada, we maintain our good name in the world (despite what some would tell you) precisely because we are a discerning people.  We do not rush to adorn our dead with saintly shrouds or hurl our reason on the funeral pyres of our heroes.  We are not swept away by the tenor of our times.  We do not chase the worship of every newly-minted Golden Calf.  We are a slow, deliberate people, loving, hopeful and optimistic; and although we need to be reminded of that sometimes, we are not so brutish that these ideals have eluded us.

But mostly Canada’s good name in the world rests on the fact that we understand that we’re all in this together.  We know that the secrets of our future are not the exclusive province of one man or one group or one philosophy. We are not the puppets of carefully crafted presentations.  It is not in our nature to build pedestals for heroes or shrines for saints, so when we do, we risk being fooled by shimmering platitudes; truisms that seek to exploit our good intentions.  They would have us forsake our reason to blindly follow the single most persistent voice. When we do that, we are nothing more than a slow motion mob — no matter how well-meaning.