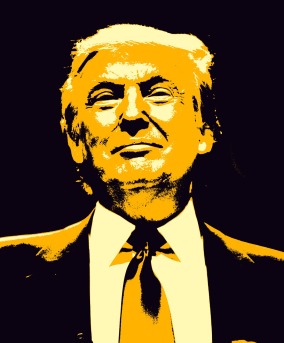 Okay, I’m officially tired of Donald Trump.  I’ve had it up to my eyeballs with the guy.  It’s been three solid months.  Even Jack the Ripper got a day off, for God’s sake!
I don’t care how bad he is.
I don’t care how good he is.
I don’t care what he looks like, where he goes or who comes to see him.
I don’t care that Saturday Night Live hasn’t been this relevant since Chevy Chase discovered Gerald Ford was clumsy.
I don’t care that Alec Baldwin doesn’t like Trump.
I don’t care that Stephen Baldwin does.
And I don’t give a rat’s ass for Rosie O’Donnell’s opinion.  (That woman’s just mean.)
Actually, I’m sick and tired of celebrity millionaires telling me how I’m supposed to care and what I’m supposed to care about.  I’ve got a  new rule: I’m not taking any advice from people who don’t buy their own toilet paper.  (And BTW, I’ve seen some of those movies they’re calling art.  They ain’t!)
I’m tired of Trumpeters, for and against, cluttering up my Twitter feed.
I’m tired of turning on the TV and seeing nothing but Trump.
I’m tired of people plastering Trump all over Facebook.  The election’s over; it’s time to get back to sick kids and kittens.

Personally, despite what the media says, I don’t think Donald Trump is smart enough to be the Antichrist, but, if he is — well — why doesn’t he get on with it?
And I definitely don’t think he’s the best president since Teddy Roosevelt.  So far, pretty much everything he’s touched has gone sideways.
So maybe — just maybe — he’s somewhere in the middle.

But that’s the problem.

It’s impossible to have a reasonable political discussion about the relative merits or demerits of a Trump presidency because every dumbass from Maine to Malibu is shouting an opinion — and most of it is just noise.

So until we quit being immature jerks, running around calling each other names, I’m out.  And, as of right now, if all the Trump supporters and all the Trump detractors were gathered naked in Antarctic, I wouldn’t give any one of them the steam off my pee to keep warm.

There’s more to this world than Donald Trump, folks!